An attack on bigots! (lets turn the tables for a minute)

*disclamer: this is a rant in the truest sense but it is important to me and that makes it emotional!*


I read an article in The Stranger on my train ride home today that made me force back tears. For those of you who are not Washingtonians, here is a little back story before I explain the article. Our state presented a law (ref 71) giving domestic partners almost equal rights, basically "everything but marriage." A religious group formed a petition to get enough signitures to be able to put it (ref 71) on the ballot in November. Basically this is a repeat of prop 8 in California but with a domestic partnership law rather than actual marriage.


Ok, now for this article. It was ruled that the contributors of this referendum had to remain public, so The Stranger decided to utilize that. The author called up some of the backers of the ref 71 vote and asked them why they were against the domestic partnership law, here is a sampling of what they said. Im calling them by their names as well just because the comments are too stupid to be hidden behind anonymity!


Carrie Vasko had some very weird ramblings that I didn't follow. She did pull out the gay teacher card though saying that "school is there to push math and science, not to push these personal agendas." Because yes Carrie, our entire life mission is to convert as many young vulnerable children as possible...bring on the toaster ovens!! (again, sarcasm please!)


Esther Mayoh (hows that for a name?!) said her main reason for being against ref 71 was that she "didnt want our state to leagalize sodomy." Here we go with the anal sex again! Yeesh people, is that the only thing you can come up with?! She passed the petition around to what sounds like quite a few people, but admited that she didn't read it! How very responsible of her. She also referenced a few family members who were "involved in that lifestyle" but are not anymore. Here is a hint Esther; they are very likely still gay, they are just lying to your bigitrous ass about it!!


And on to my personal favorite, Paul Henry, the biggest misinformed, judgemental idiot of them all! His entire belief system on this issue seems to be built on his idea of gays being basically comprable to rats. He stated that gays (I hate the use of the term "gays" by the way, its just a way to distance yourself from someone you are uncomfortable with!) are "even more than gross. I think they are major incubators of a lot of the bacteria. It is common for homosexuals to have hundreds of different sexual experiences with people...There are bacteria that are called 'gay-related syndrom' or something, but it is not healthy. And by using lots of antibiotics against them, the antibiotics are no longer usable because they don't work." What the fuck?! (excuse my language, but that deserves the F word!) Seriously, where does this stuff come from? I was unaware that my monogomous, loving, respectful relationship was crawling with bacteria simply because it is with a girl! They really should have put that in the manual when we joined this cult!


Why did this article make me cry, you ask? I have so much invested in gaining equal rights. It potentially affects my right to see my girlfriend in the hospital, our ability to raise children someday, our financial stability within our relationship, insurance, wills, and the list goes on and on...


I am being told that these basic human rights are being taken away from me on the basis of "sodomy" and some odd bacteria that dosen't even exist?! This is my life, stay the hell out of it! Giving us the right to legally be in our relationship does not affect anyone outside of it! I am appaled that anyone outside of my commited relationship finds it to be their right to take away any of ours. We are not "incubators of bacteria" who all sleep with hundreds of people. We are simply 2 people in love who have commited themselves to eachother in a very normal relationship.


Shame on you Paul, Esther, James and Carrie for placing your assumptions on my life! Keep your bigotry to yourself, talk about how horrible we are with your equally ignorant friends if that makes you feel superior, but do not impose it on a society that is working to include us. We are not asking for you to be gay or even to be accepting of us. I could not care less if you liked me, I do my best to exclude bigotry from my life. We are simply asking that you just stay out of an issue that does not affect you in the slightest way. We only want the basic human rights that you are allowed. And you are given these rights no matter the status of your marital relationship. Nobody comes into your bedroom to inspect for "sodomy" or "bacteria" because that is ridiculous, it has no merit on the ability to legally be in your relationship, so why are you placing it on mine? 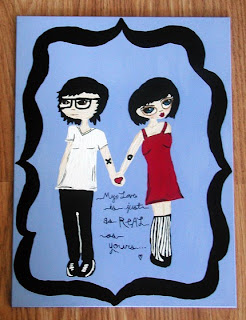 "My love is just as real as yours..."
Ok, I am done...I am stepping off of my soap box that should not have to exist.
Some of the fun stuff in here: advocacy, glbt, rant

First off, thanks for your comment on my blog. You gave me some very good advice and I agree with you. Maybe I need to give myself time to grieve the loss of relationships. I'll do my best! Secondly, I really liked this post. Especially the part about Paul Henry...all of these people's ideas, I just can't wrap my head around. They're so ridiculous! Thanks for sharing this and good luck to WA on ref 71!!

The part that makes me cry almost the hardest reading that, is they are able to vote.
Not to put too much focus on anal sex (i'm more a breasts guy)
But first, who the F is he/they to dictate if I wear a colostomy bag? Im sure(assuming) every one doing it that way needs a Cbag. and 2ndly IF that bizarre load of crap was true, okay. my favorite topic..lesbians! explain how relevant is it now?!
I feel the, um, same gender couples should stop their fight with these idiots, "gay/lesbain marrige" is a battle they will not and can not ever win.So get over it Okay. Marrige is a word, words matter. the marry thing is a sacred holy church word. So like sex, get creative, create a new word or term. You all want the rights you pointed out. adoption/child raising, estate issues, visitation right for hospitals and so on. 10 years blog was meaningless. 2 years ago tweeting was? See where Im going? create some term or word for what you want, same sex marrige, losing fight.. remove the hint of church and state control away. "equal rights"?thats close, but as you see its still tricky. no church or sexual based guidelines.

Sorry for the babbling, but do I make sense on this?

I think we should go water skiing, jet skiing, or maybe just float down the river. We can then contaminate the waters of this earth with our bacteria!!!

John - that actually didn't make a ton of sense! :) I hate to tell you though; we are going for marriage and we will get it! "marriage" does not have to mean church, people get married in courthouses and vegas all the time. What makes that any more important than a gay marriage?

Honey - I didnt include the "water sport" quote, so people may just think you are crazy...! ;)

Oh killjoys who opine about things they know nothing about:

When will you stop killing fun and freedom and joy and liberation and the wonderous government we have with lies and paranoid rantings that don't make any sense? They need to learn to freakin relax.

oh crystal,
im sorry, I was thinking marriage meant what it has meant from the dawn of its creation into the language.
Yes I am being a smartass, you say it doesnt have to mean that tho.

Youre right it doesnt, But it will still and always mean what it means.
You can continue to fight for it to mean something else. But as long as the system is ruled by people that look at its meaning as one thing, You can fight all you want.
If you start calling a cat turd, peanutbutter, its still going to taste like shit on toast and No one is going to accept the definition change to the word.

So you all keep fighting for the rights you do deserve n keep calling it a word, that everyone most, not all) will not redefine.
You can spend massive amounts of time an money thinking you will win.

John - I know you are being sarcastic and not actually insultful...but with all due respect; I am going to save this communication and send it to you along with a copy of my marriage license when I (legally) get married!!

Thats great, I guess. I mean you getting married. I hope the woman you marry is better that the one I married. do I get copy of the honeymoon too :)
ok that was a predictable comment.

I dont plan to be here too long tho. But I do hope both your marriage and your goal are successful. I love your room very much and partly because mine is almost identical, small bed, small walking space then the desks. Altho my bed is neater and I have 3 PCs. I do like watching my collection and Im not a student with papers everyhwere. And I love that poster your lizard is looking at. I have the poster titled KISS blank an white just looks awesome.

But the point I came here for was to ask if you had gotten the answer to your Question regarding the gadget that might show "you might also like" 3 other posts. babblinbob has that and Im sure he could help you getting it.
anyways I got things to watch try not to neglect sleep. I dont sleep much, and see how smart I am