There was a guy on the train this morning complaining about the health care debate because, "the only people without health care are the lazy ones who don't work or the ones who decide to spend their money on tvs and stuff instead!" Seriously buddy?! I am a full time grad student who chooses (maybe not the right word...forced is more like it!) to buy textbooks instead of health care...not tvs! My application got dropped from Washington state basic health because of "budget cuts" and I can't afford any other coverage.

Also, because people are fighting to take away my equality rights within my relationship (vote to approve ref 71 please!) I wouldn't be able to be covered by Rachel's insurance even if she had it!

I understand that there is a misuse of the system currently in place and that there are likely many people acting in just the manner that he was speaking of. But, keep your judgemental ignorant display to yourself. Those of us working our asses off to better our situations don't need to hear that during our morning commute!
No comments:
Some of the fun stuff in here: rant

Squishy is the Queen!

This is how you make a bed when a cat is laying on the rumpled up corner... 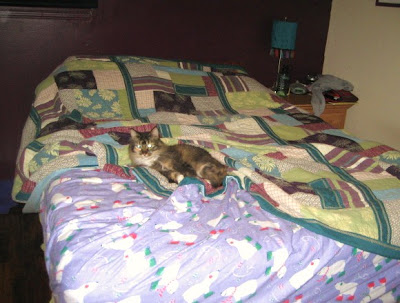 She glared at me the entire time with a look that said, "do not even think about moving me to make this bed!!".....so I didnt! Anyone with a female cat knows that there is no point in pretending like you are in charge!!

ps: I was running late this morning also because she laid (all comfy looking) on my back as I was trying to get up! :)

pps: Don't laugh at our polar bear sheets. They were on sale and they are flannel...plus they are purple and I think they are cute!!

And a cute picture of Domino with his head out the window on the way to the dog park....just because its furry friday! 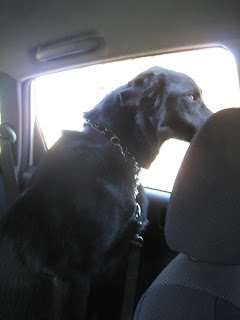 3 comments:
Some of the fun stuff in here: furry fridays, pets

Really, I do. I am a very very good pet mom. I went into debt in order to give my baby an extra year for cripes sakes! Plus I take care of other people's pets very well in all the different arenas that I have done so in my life (vet jobs, pet sitting, etc..).

Well today, I have had someone accuse me of neglecting their cat and yell at me for saying that I believe dogs should be neutered! What is going on in my world today?!

I was at the dog park and a lovely (sarcasm please!) lady came in with her unaltered doberman. He instantly started fighting with another male directly in front of me so I simply stated "thats what happens with 2 unneutered male dogs." She got all defensive saying "no, he's just playing..trying to show he is boss." I was quiet for a bit. Then, he got into 2 more fights that she had to break up by standing between the dogs. During one of these, Domino was right in the middle. He can't read aggression, so he just sulked over to me, scared and confused. The owner of the other dog is somone who I have talked to a few times and she is constantly contimplating wheather or not to neuter her dog. (Why this is such a decision is beyond me!) I told her that she may want to leave before the dogs get themselves hurt and informed her (yet again) that unneutered males often fight like this. Well, the doberman lady heard this and went crazy! She said "I work in the vet clinic down the road so I know that isnt true!" to which I replied (calmly) "Ive worked in vet clinics for 10 years and I have seen many injured dogs from male aggression fights." I also said that I was surprised she had a purebred, unneutered, ear and tail docked dog since she claimed to work in a vet clinic. Most people in clinics have compassion enough to at least not torture their dog in these ways, and dont get me started on the mutt over purebred argument! She claimed that her clinic dosent hold that belief "they believe in the breed!" which was a bunch of bs and simply her way of justifying her selfish desire to have a purebred fake showdog.

Meanwhile, I am keeping an eye on the dogs. Her dog keeps picking fights with the males. Domino is sticking to the sidelines, confused about the lack of friendly playing. And, people are 1 by 1 taking their dogs either home or into the other dog park area. Oblivious lady though, still thinks that she is right and her dog is "just playing." Awesome. Although I completely stick to my belief that dogs should be neutered except in the very very rare occasion that you are actually a responsible and well intentioned breeder (rare rare case!). I still was upset by this lady challenging me and telling everyone that they do not need to neuter their dogs.

The other case; a lady I was cat sitting for this weekend completely lied to my boss and said I neglected her cat! I love cats and this one's name was Purple, anyone who knows me knows that I would never neglect a cat..expecially not one named Purple! So although my boss believes me and I am sure the lady was just trying to get a free service, It still stung.

5 comments:
Some of the fun stuff in here: pets, rant

What does this say to young girls??!!

This is what is wrong with our society! Why do we need models that are so skinny they are sick? How do you make a size 4 woman feel fat?! Seriously, I am baffled by this. This picture is absolutely disgusting! It isn't even physically possible to be this skinny, why photoshop a beautiful skinny girl down to an alien looking form?

I know I am not alone in my belief that a confident, healthy woman is far more attractive than a sickly one who feels fat in her size 1 jeans! Case in point; Dr. Torres on Grey's Anatomy is leaps and bounds more attractive to me than Dr. Grey!! (And no, the irony of the fact that I had to pull a fictional character as a reference rather than a real woman in our society is not lost on me) She is confident in her skin, she even danced around in her underwear on tv!!

Why are we setting this unattainable goal for our women? If our society is making models feel fat, there is something that needs to be changed! We need to embrace ourselves and find a way to be comfortable in our skin. I am not saying anything is wrong with wanting to look good. But, you do not have to look like a photoshoped model in order to do so. Be happy with your unique aspects, it is what makes us different! Be healthy, eat well, find a weight that is comfortable for you, then flaunt it! Confidence and uniqueness are far more sexy than trying to fit some predetermined mold! Come on girls, nobody wants to be a plastic Barbie, how incredibly dull! Let yourself age, embrace your laugh lines, they are proof that you are living! Enjoy life and enjoy food, do you really want to die wishing you had eaten that piece of oreo cheesecake?!

Much thanks to Dove for using real people as their models!!

5 comments:
Some of the fun stuff in here: advocacy, rant

One of those weekends...

Its been a less than desirable weekend. On Thursday night I fell down some stairs at a house I am petsitting at and landed directly on my tailbone. It hurts like hell! So, for the past couple of days I have been walking like I have a stick up my butt and grimicing in pain every time I have to sit down. Its been a blast.
This morning I went home, looking forward to the couple of hours this weekend that I got to spend at home, and drove in to a circus being put on by our neighbors. Awesome.
Heres to hoping that Sunday is enough to redeem the weekend.....
5 comments:

Buy it. It rocks!

Brandi Carlile Give up the ghost

3 comments:
Some of the fun stuff in here: Brandi Carlile, music, wordless wednesday

A hodgepodge of information....

....because I still dont have internet! Looks like its going to be a month without it now :( sucky....

So, I have been spending a lot of time in the library and starbucks. This sucks because...well because its not my comfy couch mainly! It is interesting for people watching though. Plus I just got a mini notebook for school, so I have been getting use out of that. We were in starbucks the other day and we got to watch the poor cashier give everyone that dumb taste challenge that they have. What a waste of time! Just give people the free sample and get the line moving along, yeesh!

Off topic; we went to see Whip it on Sunday and it rocks! I love Ellen Page, she is hilarious! Anyways, its a really funny movie and it made me want to finally make it out to see the Rat City Rollergirls. I have been saying that since I moved here so maybe I will actually do it now!

Pet news; we are searching for a dog walker or dog daycare for Domino. Its an interesting search....he is a handful and I think my description of him ("a 100lb dog who is very undersocialized, needs a female walker and at least a month to warm up before he will not be spooked by everything on a walk with you") is scaring people off. Im not getting many replies to my emails.....?

Ok, thats it. Im feeling disconnected from the world....poor me.
3 comments:
Some of the fun stuff in here: movie

Squash is very brave, and a bit of a brat! She is no longer scared of Domino, so now it is her self-proclaimed job to make sure he is aware that the house (and everything in it) belongs to her! So, what does that result in? A 6lb cat bossing around our 100+ pound dog! 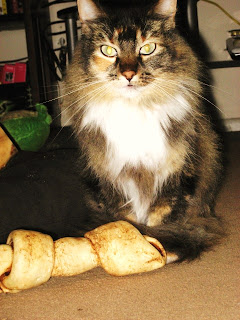 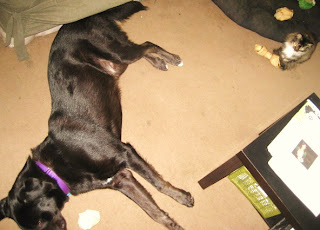 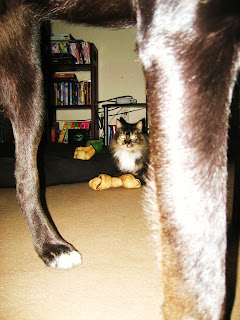 He didn't even attempt to get his bone from her, just looked at me with pleading eyes. The pictures don't do justice to a Squishy glare!
1 comment:
Some of the fun stuff in here: furry fridays, pets
Newer Posts Older Posts Home
Subscribe to: Posts (Atom)