Im done with my car! It has treated me really well all though my college years, but it is on it's last leg. I want to say, no more wasting money on gas, no more fear of a car overheating in traffic, no more paying ridiculous amounts of money just to park...I want a scooter!!!! 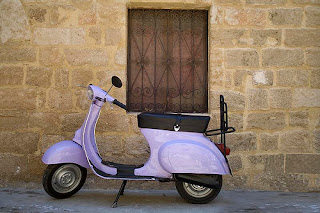 I am absolutely in love with this one!! Tell me it isn't the most adorable little vehicle you have ever seen?!?!!
Sigh, I just thought I would share my new obsession :) Someday this will be me.....

3 comments:
Some of the fun stuff in here: purple

Im so excited! We needed somebody in country music to come out and be true to themselves! Im proud and amazed at her ability to find the courage to be true to herself and finally go against the society and community that was stifling her and causing her so much pain. I also think her father is the epitome of someone from that generation who moved from ignorance to acceptance on the basis of love for family. She is beautiful and strong and I am so happy that she is a part of my "family!!!"

..... I dont know what to think though about the publicity ploy. She has been basically out of the spotlight for years and comes out publicly right before a new book and cd. Im pretty sure it was her agent's idea to time it this way, and it was obviously a smart idea because she is on Oprah! Is that weird? Should that be seen as a ploy? I don't know. And honestly, I dont even know if it would be a bad thing if it was a publicity ploy!? As I said, struggling with my stance here (or if it even warrants a stance!). I feel bad even typing this because I really am so very happy for her and so proud of her bravery, Im just trying to get other's ideas here...
What are your thoughts?
2 comments:
Some of the fun stuff in here: glbt, music

Lee has the sexy raspy voice down and is just so damn humble, I love that!!

Oh but Crystal, Im such a sucker for quirky!

Lets just take them both :)


Thoughts?! Are you rooting for either?


2 comments:
Some of the fun stuff in here: music

Whatever lifts your luggage!!

I read a piece in the Stranger today that discussed this article. Apparently this douche (classy dig, I know, but whatever..I just like that the link to the story about him is to click on the word douche!) who is an anti-gay activist, going as far to be a member of NARTH (not worth a link, sorry), which is a group that does "research" surrounding the evils of homosexuality and how to "cure" it (gag!). Anyways, it was recently discovered that he had a "luggage boy" (hehe) travel with him on his publicity tour because he "couldnt lift his own luggage"....right, because the first place I look for someone to carry my luggage is a male escort site too! Back to the Stranger article, the author was proposing that the term "whatever floats your boat" be changed to "whatever lifts your luggage" as a way to pay ironic homage to this guy's hypocracy. I think it is hilarious!!

On a somewhat side note, Newbo shared a story about the Pope's rant against the new gay marriage in Portugal. Which I also was enraged by. Shouldnt the Catholic faith be more concerned with their own internal problems than waste their time on something as benign as gay marriage?!

Come on people, loosen up! If it doesn't affect you...it shouldnt affect you!!! Live and let live, even when you don't agree or understand something, thats ok but don't judge and ridicule, just say, "whatever lifts your luggage" :)
4 comments:
Some of the fun stuff in here: advocacy, glbt, rant, religion

We finally made it to see the Rat City Roller Girls last night and it was awesome!!!


Its just such a fun crowd, plus a really fun sport to watch!
Those girls are tough!
As I have mentioned before, I loved Whip It, and seeing it in person was even better.
It looks like so much fun, what a great way to get out some pent up anger!
"You win some, you bruise some!"....
Oh and my new roller derby name is "Read em and Weep!"
Yup, Im pretty proud of that :)
This last video is for Lynn and her "Single Ladies" obsession.
The half time show was a local group called Dance Belt, they were hilarious!
Sorry the video sucks and is incomplete but it is all I could find.
If you cant tell, the middle one is a bald guy,
complete with heels, leg warmers, and a bow taped to his head!!
(check out the link above for pictures!)