Michael Vick has been reinstated into the NFL. He has been given the green light to go make millions more even though he proved that he used that money in an illegal and painfully cruel manner. Why is he being allowed back into the NFL after committing a felony? Why is dog fighting not held with significance by a national organization?!

Dog fighting is an absolutely disgraceful excuse for a "sport!" How manly can you call yourself if you have to force helpless animals against each other in order to make some money and then have the audacity to call it a sport?! For those of you who are not familiar with the torturous aspects of dog fighting, here is some information.

Dog fights generally last for about an hour. That means these dogs are forced (yes, I used the word force, they do not enjoy this by nature) to fight through their pain until one is no longer capable of providing "entertainment." This does not always mean instant death though. Often dogs will die hours or days later after suffering though infection, shock, and blood loss. Once a dog has lost a fight, he is no longer useful to his owner (aka: he didn't make money so he is worthless). Although it would be nice to hope that this means the dog would be put to sleep or "disposed of" by it's owner in a humane and ethical way, this is rarely, if ever, the case. The dog that looses a fight is often used as a bait dog to train new fighters, left somewhere to die, or worse. I have read cases where the dog was lit on fire by the disgraced owner in an attempt to regain his pride in the face of defeat. 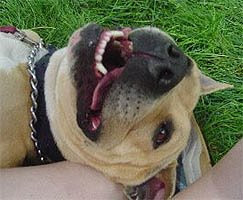 The pit bull stripped from man's influence is an absolutely amazing dog. The irony of the situation is that they were brought into the world of dog fighting partially because of their overpowering desire to please. A pit bull as a family pet will defend it's owners to the death. Only our voracious species would utilize such a noble trait for our own selfish benefit.

Many people think that it only takes trait specific breeding to produce an animal that will fight in this manner. The truth is that breeding is only the first step, it produces the capability, not the behavior. The sadistic people who conduct this form of breeding are very smart in their own cruel way. They breed out the submission trait and breed in gameness. This means that they take away the dogs natural desire to quit fighting once the fight is won by their terms, and replace it with their own version of "winning." 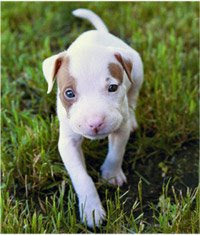 Once the "ideal" dog is formed, the owner begins their behavioral work. These dogs are not pets by any sense of the word. They are kept secluded from other dogs most of the time; often living their sad existence on a short heavy chain to produce both a strong neck and a restless disposition. They are often given steroids and narcotic drugs in order to produce the desired aggression. Repetitive abuse is a common technique to essentially "piss off" the dog and antagonize it into aggressive reactions. The initial fighting training consists of pinning the dog against a "bait" target and beating him until he begins to fight. The initial target is always an animal that is incapacitated in some way and often found through free postings on sites such as craig's list. Eyes are gauged out, limbs are cut off, whatever it takes to qualify as a worthy bait for the new fighter.

I hope that I am effectively painting the picture that it is the egotistical humans that are producing the fight in these dogs; not their breed. People often argue that pits should be outlawed and although I sympathise with this viewpoint, it is not the answer. The pit is the current victim, riding the world of this selfless breed will only produce a new target for these people. We need to advocate for the breed and against the crime! Punishing the victim only reiterates the idea that the human is not at fault. It leaves society with a sense of a "big scary pit bull" when the truth lies a much more active and dangerous fear that lies within our own species. 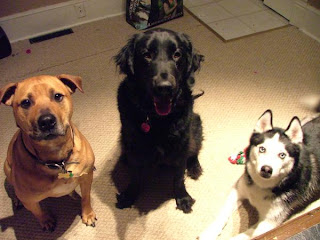 Laredo, Jackson and my Beau :)
Some of the fun stuff in here: advocacy, pets

Wow. I really had no idea about the cruelty involved in dogfighting. (to be honest I didn't know anything about it period)
Now that I know though, I can't believe the NFL is condoning Vick's behavior by opening the league to him!

this is the saddest thing. there should be a longer sentence for felonies such as this. its shameful we consider ourselves a modern society.

I love animals. People who mistreat them make me sick. Hate that Vick has been reinstated into the NFL. He doesn't deserve it.

Thanks guys for the support, I was hoping I wouldn't get any Vick fans yelling at me! :)